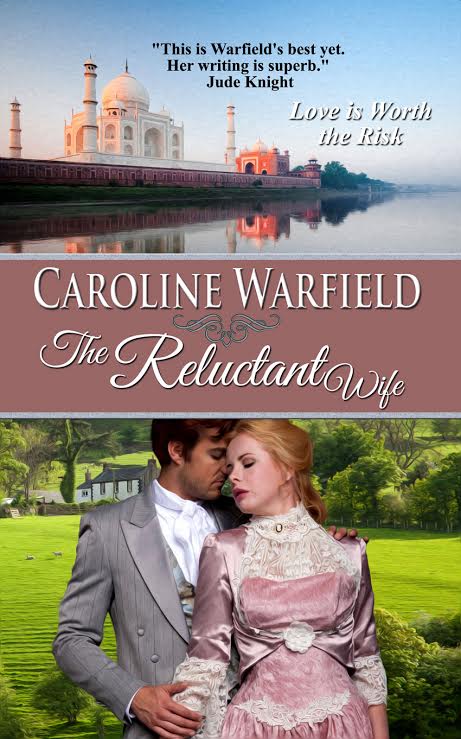 Happy Release Day to fellow author and friend, Caroline Warfield! The Reluctant Wife (Just the title alone makes me want to read it) is available for your reading pleasure right now. You know you want to…

Caroline Warfield is over the moon to finally be able to release The Reluctant Wife into the wild.

This sweeping story carries readers from the edge of Bengal to Calcutta to the Suez and across the desert, to rural England while two people stumble into love in spite of themselves.

The hero, a clueless male with more honor than sense, never stops trying to do the right thing. Imagine his shock when he realizes people actually depend on him!

The heroine is a courageous wounded duck with more love bottled up than she finds comfortable.

The self important villain, rotten to the core, makes the hero miserable in both India and England, until the hero brings him down—with a little help from family—in the end.

And last but not least, it features two charming children, one a precocius little girl who pushes the hero to do what is right even when he is confused about what that is. 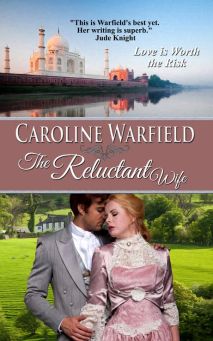 The author dedicts this one to her father, the constant soldier, who understood duty and loyalty as few people do.

Thank you for joining the celebration. Tell us about your favorite story elements. Caroline will give a kindle copy of The Renegade Wife, Book 1 in the series, to one person who comments.

Three cousins, torn apart by lies and deceit and driven to the far reaches of the empire, struggle to find their way home.

When all else fails, love succeeds…

Captain Fred Wheatly’s comfortable life on the fringes of Bengal comes crashing down around him when his mistress dies, leaving him with two children he never expected to have to raise. When he chooses justice over army regulations, he’s forced to resign his position, leaving him with no way to support his unexpected family. He’s already had enough failures in his life. The last thing he needs is an attractive, interfering woman bedeviling his steps, reminding him of his duties.

All widowed Clare Armbruster needs is her brother’s signature on a legal document to be free of her past. After a failed marriage, and still mourning the loss of a child, she’s had it up to her ears with the assumptions she doesn’t know how to take care of herself, that what she needs is a husband. She certainly doesn’t need a great lout of a captain who can’t figure out what to do with his daughters. If only the frightened little girls didn’t need her help so badly.

Clare has made mistakes in the past. Can she trust Fred now? Can she trust herself? Captain Wheatly isn’t ashamed of his aristocratic heritage, but he doesn’t need his family and they’ve certainly never needed him. But with no more military career and two half-caste daughters to support, Fred must turn once more—as a failure—to the family he let down so often in the past. Can two hearts rise above past failures to forge a future together? 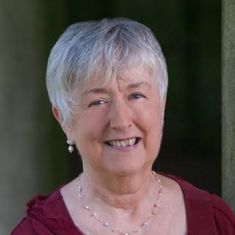 Traveler, poet, librarian, technology manager—Caroline Warfield has been many things (even a nun), but above all she is a romantic. Having retired to the urban wilds of eastern Pennsylvania, she reckons she is on at least her third act, happily working in an office surrounded by windows while she lets her characters lead her to adventures in England and the far-flung corners of the British Empire. She nudges them to explore the riskiest territory of all, the human heart.

Caroline is a RONE award winner with five star reviews from Readers’ Favorite, Night Owl Reviews, and InD’Tale and an Amazon best-seller. She is also a member of the writers’ co-operative, the Bluestocking Belles. With partners she manages and regularly writes for both The Teatime Tattler and History Imagined. 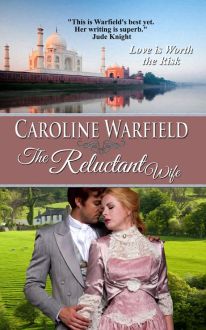 The ballroom at Government House, Calcutta, 1835

Clare had stopped listening. A prickle of awareness drew her gaze to the entrance where another man entered. He stood well above average height, he radiated coiled strength, and her eyes found his auburn hair unerringly. Captain Wheatly had come. The rapid acceleration of her heart took her off guard. Why should I care that he’s here?

“Clare? The lieutenant asked you a question.”

Lieutenant? Clare blinked to clear her head, only to see Mrs. Davis’s icy glare turned on Captain Wheatly. “Is that your strange captain from the black neighborhood?” she demanded in a faux whisper.

The lieutenant’s avid curiosity added to Clare’s discomfort. “Is that Wheatly in a captain’s uniform? I thought they might demote him after the business with Cornell,” he volunteered.

Clare forced herself to turn to the lieutenant. “Cornell?” she asked to deflect Mrs. Davis’s questions.

“Collector at Dehrapur. Wheatly assaulted the man. Unprovoked, I heard,” the lieutenant answered.

She looked back, unable to stop herself. Merciful angels, he’s seen me. She watched the captain start toward them. At least Gleason could make introductions.

The lieutenant went on as though he had her full attention. “He was in line for promotion, the one that went to your brother instead. Philip posted over there right after it happened.”

Clare found it impossible to look away. The captain gave an ironic smile when he saw her watching. Mrs. Davis gave a sharp intake of breath when she realized Wheatly’s intent. “He’s coming here? Clare, I think I should warn you that a man who has been passed over as this one was—”

Before she could finish, Colonel Davis, who had been coming from the other direction, met the captain and greeted him with a smile. Clare couldn’t hear the words, but Captain Wheatly’s self-deprecating grin seemed to indicate at least a modicum of respect. The two men approached together.

“Captain Frederick Wheatly, may I present my wife, Mrs. Davis.” The captain bowed properly, and the colonel went on, “And our house guest, Miss Armbruster.”

This time the captain’s eyes held a distinct twinkle. “Miss Armbruster and I are acquainted. I met her when she visited her brother in Dehrapur.”

“Of course, of course! I should have remembered,” the colonel said jovially. He leaned toward Clare and winked. “He’s a catch, this one. Doesn’t like to boast of his connections, but earls and dukes lurk in his pedigree. His cousin stepped down from Under-Secretary for War and the Colonies just last year!”

Gleason looked skeptical. “The Duke of Murnane?” he gasped.

Before anyone could answer, the small orchestra hired for the occasion began to play, and the captain cocked an eyebrow as if to ask a question.

“I think the captain wants a dance, Miss Armbruster. It’s your patriotic duty to see to the morale of the troops,” the colonel said coyly.

Captain Wheatly put out a gloved hand, and she put her equally gloved hand in his. Walking away from Gleason and the Davises, she admitted two things to herself. She was glad he came, and she planned to enjoy the dance.

Are you as ready as I am to keep reading? Grab it here: https://smile.amazon.com/Reluctant-Wife-Children-Empire-Book-ebook/dp/B06XYRRR1R/ 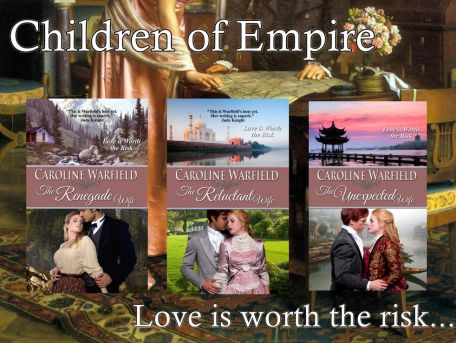 Tami Lund is an author, wine drinker, award winner, and supporter of her fellow authors. You should support them, too! Especially Caroline Warfield, because her books are wonderful and she’s a pretty cool person, too.

One thought on “The Reluctant Wife Is Reluctant No More”

This site uses Akismet to reduce spam. Learn how your comment data is processed.